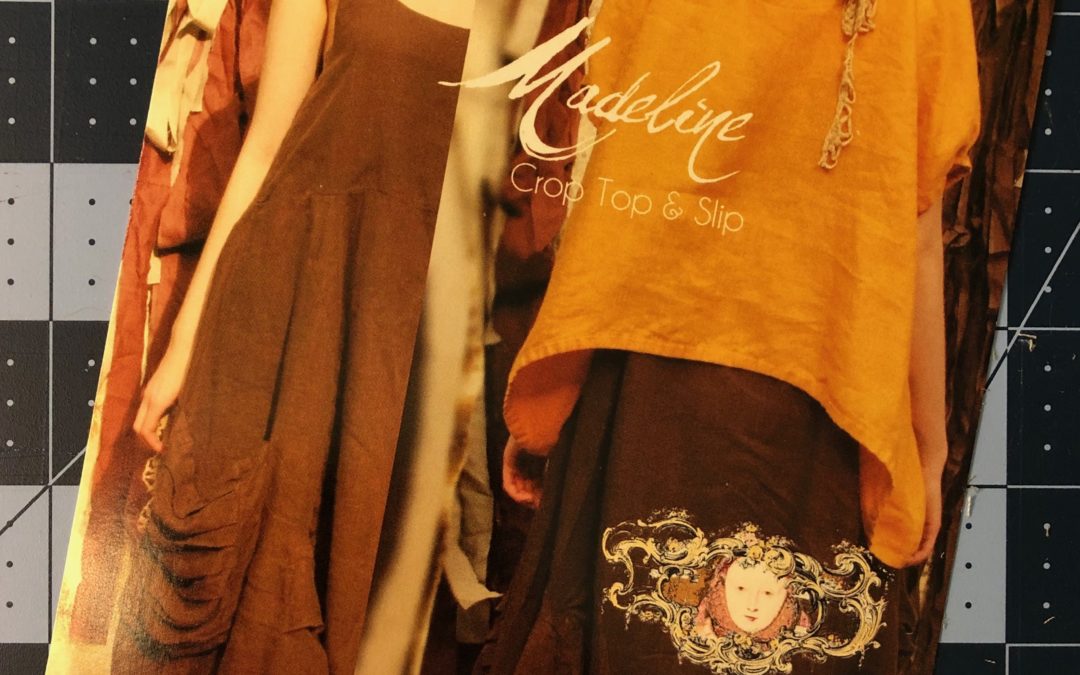 I don’t remember how I first found Tina More than likely, it was searching Google for lagenlook patterns.

I had fallen in love with the lagenlook style, it seemed like the perfect cover up for my over-abundant curves, but I couldn’t find anything vaguely floating my boat in the pattern books at my local fabric store.

I purchased Madeline on a whim. I chose the paper pattern over the PDF download and waited an eternity before it came in the mail. From one state away. I think they walked it here.

In those days, we had  Hancock Fabrics in town, and the infamous tag section had some questionable fabric that had great “fall” and was very inexpensive. It was a very dark grey and white tiny check and frayed like nothing I’d ever sewn with before, but I made it work. Mostly.

The pattern instructions were very scant, as I later found out was a common thread in STG patterns. I’ve heard it explained as “leaving it up to your own interpretation” – but these instructions had whole words that were wrong. The pattern has triangles inserted into the skirt of the slip, yet the instructions tell you how to prepare the “rectangles”. (There are rectangles, but that’s a totally different issue.)

Let’s talk about . (Not the rectangles I totally messed those up as well!)

The pattern instructs you to cut the skirt in two places, about 10″ or so up from the hem. No problem.

Then, you make tucks (the instructions suggest two or three) in each triangle to reduce the height by about half. It’s not clear from either the instructions or the pattern if these folds are upwards or downwards (use your own interpretation). 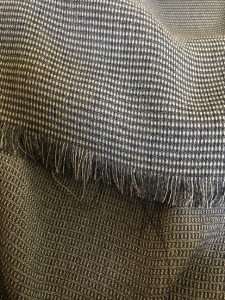 Aside: I’m guessing you would stitch them in place, but I’ll leave that up to your interpretation. LOL.

My first, completed Sew Tina Givens piece was such a botched up job, I didn’t even hem the inside of the facing. Look at that fraying (pic to the right)! I only attached one pocket because, after the triangle debacle, the pocket just seemed to be beyond my level of (in)expertise.

I’ve worn it, as you can see in the obligatory bathroom selfie. Because I love the drape of this fabric. I love the weight of this fabric. I wish I knew what it was! Rayon, maybe? Heck, it could even be nylon!  I do think that one day I’ll fix all that’s wrong with it and I will wear it even more.

So I made another one! 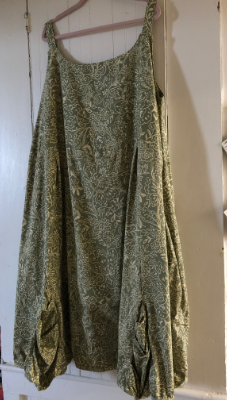 It’s rare for me, these days, to buy fabric. Instead, I scour thrift stores for the perfect sheets, and I had just the right sheet waiting for Madeline Mk II. A green and beige batik-ish print, with a hint of stiffness. Mercerized cotton, maybe? I should have kept the label!

I decided, after the last debacle, to not even tackle the cargo pockets. I can always add them later. Instead, I opted for in-seam pockets – because every dress needs pockets. Right, ladies? I just used the standard Sew Tina Givens pocket and measured where I thought they should be on the skirt.

Aside: I put pockets in everything now. If there is no side seam I alter the pattern to accommodate a side seam. One day, I’ll progress to welt pockets. Just not today. 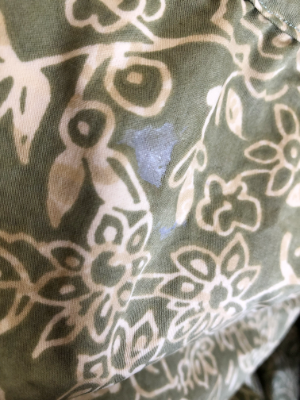 I didn’t realize that my sheet had paint on it until I was taking an up-close picture of that damned triangle! Oh well, you can only see it if it catches the light just right. I’m not really too fussed about it. And even if it was noticeable, I’d slap a patch something over it and call it a design feature!

I decided that I wasn’t going to let the triangles ruin my mojo. I was on a mission and nothing was going to bring my mood down! If they didn’t work of their own accord, I’d just beat them into submission.

I have a much smaller workspace now, so organization is crucial. I have to work efficiently because I no longer have room to throw pieces of fabric and pattern pieces around with gay abandon. I pretty much cut out the pieces I need as I need them. I just need to remember to check I have enough fabric before I start cutting!

I cut the skirt panels and the triangles first and set to work.

Did I mention, when talking about the Madeline Mk I that the instructions, in one place, call the triangle a rectangle? So confusing!

I’m fairly sure that when I made the first Madeline, I put the tucks the wrong way up, but the – as I mentioned before – the instructions don’t really offer much help. I opted to make the tucks in the opposite direction of Maddy #1. (If they were the other way, I think things would get caught in them. Things like lint, crumbs, small children …) 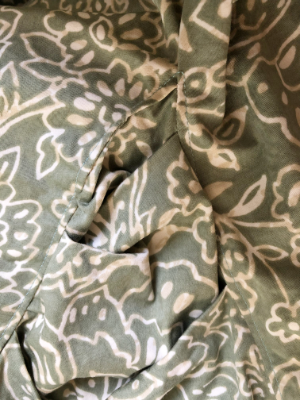 I did my best to insert the triangles so they didn’t look like an afterthought, and there were no gaps in the top. Seriously. You try it! Even with a triangle with no tucks. The instructions say to insert the triangle with right sides facing, which is OK for the first side, but when you get to the second side it’s a right royal pain in the arse to get everything to sit correctly!

I jammed them in. (See image to the left.)

I have no idea if it’s done correctly. I have never seen it done properly up close. It’ll have to do. Topstitching covers a multitude of sins.

Once I had the triangles in place, I added the pockets where I thought they should be. I held the panel up against my body, put my hand where it would normally enter the pocket, and marked that spot with a pin. I then aligned all my pocket pieces and stitched them in place. More on that later.

I cut out and finished up the rest of the dress and was so happy that I had a serger to finish up some of the hems. I didn’t have a serger when I made my first Madeline, hence the frayed facing. Serging a curved hem is SO much more efficient than trying to make a tiny hem.

I do like Tina Givens’ use of binding as a finish. I tend to make a lot of my own binding, I find it a great way to use larger fabric scraps. The pattern called for a couple of small tucks in the hem to “bring it in” a little, but I stretched the binding a little as I attached it, getting the same result, but with a different technique.

Et voila. Madeline Mk II is complete. And yes. I’d make it again. It seems like one of those patterns you could make ten times and each one looks different from the last.

The tops of the pockets align with the tips of my pointer fingers. Next time, I’ll measure. That’s all I’m saying about that. This is why we make muslins. And this is why I don’t use expensive fabric to make my clothes.

Where to get it: 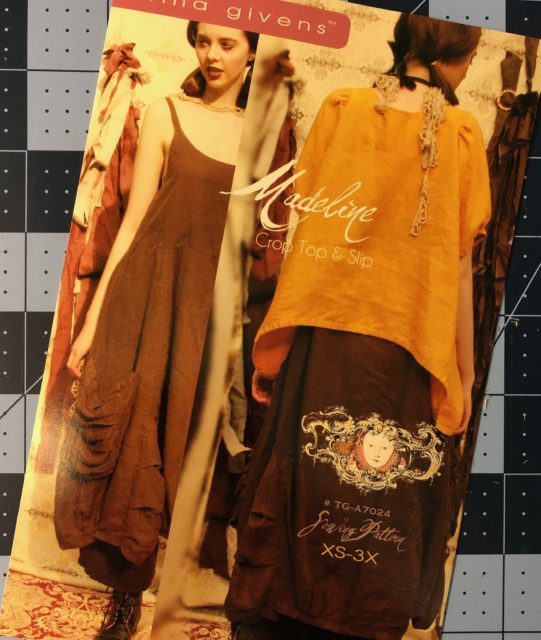